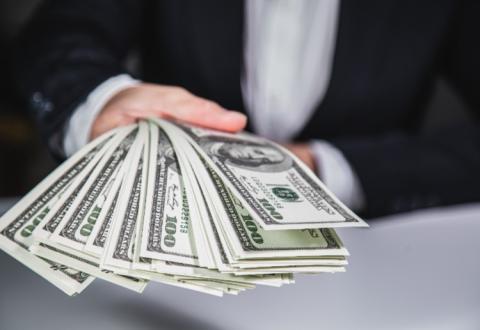 I recommend reading Parts 1 through 3 before reading this essay

During the nineteenth century, the standard of living in the US rose more rapidly than it did in any other country because economic freedom in the US was much greater than anywhere else in the world. Taxes were extremely low, government regulation was miniscule, and the market still retained some control over money. By the end of the century, the US was on the verge of overtaking Great Britain as the world’s foremost economic power.

Characteristic of ‘market control over money’ is a falling price level for goods and services. The following chart[2] tracks the US price level of a basket of goods, which dropped from a level of 51 in the year 1800 to a level of 25 in the year 1900, a decline of 51%. The two blips on the chart during the 1800s were the result of massive government interference with money during the war of 1812, and the Civil war, when it permitted many banks to ignore their contractual obligation to redeem their bank notes. This allowed the government to borrow enough money from banks to finance the wars, the cause, leading to an increase in the general price level, the effect (another effect was hundreds of thousands of deaths). Later, the price level began its upward trend shortly after the government created the Federal Reserve System (US central bank) in 1913. Governments around the world were beginning to monopolize the issuance of money, which eroded the influence of the market. US  GOVERNMENT  BREAKS  ITS  PROMISE

In 1944, in Bretton Woods, New Hampshire, a new monetary system was forcefully imposed on the world during a meeting of State/Banking cartels from various countries. With the US emerging from WWII as the dominant world power, it was in the enviable position of being able to dictate monetary terms to the war ravaged countries of Europe. Thus the US dollar became (a) the preeminent currency in the world, redeemable in gold, but only by cartels at the rate of $35 per ounce, and (b) the only remaining currency redeemable in gold. This had the desired effect of increasing the demand for dollars, making it easier for the US cartel to print even more fiat dollars, thereby reducing the value of all dollars. Thus, the general price level in the US rose to 100 by 1967.

Naturally, the constant printing of dollars prompted foreign cartels to redeem many of their dollars, thereby reducing the US gold stock by more than half between the early 1950s and the late 1960s. On August 15, 1971, fearing a significant gold drain, President Richard Nixon announced that the United States would no longer honor its promise to the foreign cartels.

THE  CARTEL  BENEFITS  FROM  INFLATION

With the final link to honest money extinguished in 1971, the entire world embarked on a one hundred percent fiat money system for the first time in history. With the cartels in complete control, fiat money printing went into overdrive as bankers, politicians, and bureaucrats lined their pockets. Governments increased their debt loads in order to fund their rapidly expanding bureaucracies. This drove the US price level from 121 in 1971 to a staggering 583 in 2005, an increase of 382%. Other countries experienced similar price inflation.

If this massive price inflation was matched or exceeded by the growth in incomes, perhaps the public would have little to complain about. Alas, this has not been the case. Fiat money guarantees the economic well-being of bankers, politicians, bureaucrats, and their friends as they secretly suck wealth away from the rest of us through bank loans and monetary inflation (see Part 3). Conversely, the greatest possible economic well-being of the public depends on market control of money. The nineteenth century stands as conclusive evidence.

THE  PUBLIC  BENEFITS  FROM  DEFLATION

When the market controls money, the economic tendency is for annual production increases to surpass annual increases in new money (e.g. mined gold). The natural result is falling prices. When a static quantity of money, or a slowly increasing (mined gold) quantity of money is attempting to purchase a faster growing quantity of goods, prices fall. A wage is simply the ‘price’ of labour, thus wages also tended to fall during the nineteenth century, but prices for goods fell further. This means that ‘real wages’ (the purchasing power of wages) were rising, which provided a steadily increasing standard of living for the masses in the nineteenth century.

Consider the evidence found in a time capsule dug up from underneath a San Francisco school in January, 2011.[4] It had been buried in 1910. One of the items inside the capsule was a 1911 Board of Education salary schedule indicating a grammar school teacher would earn $2,460 for the year. The website for the US Bureau of Labor Statistics includes an inflation calculator which can perform calculations going back to 1913. That’s close enough.

In 2016, teachers were unable to match the salary of the 1911 teacher until their eleventh year when they finally receive a salary of $60,146. But we also need to consider taxes. Today’s teacher must pay Federal income tax, California state income tax, Social Security tax, Medicare tax and many other taxes and government fees, none of which existed in 1911. A conservative estimate of 30% leaves the teacher with 70% of the salary, equal to $42,102 for our eleventh-year teacher, as compared to $59,989 for the 1911 teacher.

This is the opposite of economic progress. Fiat money, high government taxes, and stifling government regulations have reversed the positive market-based trend of the nineteenth century. The masses of people in every country are victims of this economic decline. In terms of prospects, the 19th century worker wins easily.

THE  CARTEL  WOULD  DISAGREE

Some would say taxation is a net benefit to society, and we must factor this into our consideration of the prospects for the 21st century citizen. However, over the course of a lifetime, most people who pay taxes do not receive tangible or intangible benefits from the government which come even close to matching the taxes they paid.

Furthermore, let us not lose sight of the fact that a teacher in 2016 was unable to match even the gross salary of the 1911 teacher until their eleventh year. Over a span of 105 years, that is not a sign of economic progress! That’s all the proof we need. Inflation imposed by the cartel benefits the cartel, not the public.

Whenever bankers, politicians, and the economists they employ are asked the question “Why can we not use gold as money?” they typically reply by saying “There is simply not enough gold in the world to accommodate the huge number of transactions in our modern economy.” End of discussion. There are a few good economists who see the lie in that answer, yet it sounds plausible to many people who fail to grasp the nature of money.

New supplies of gold on the market do not keep pace with new supplies of goods and services, and this is bad according to the authorities, because it results in falling prices. They tell us that price inflation is good and price deflation is bad. They say that rising prices are a sign of economic prosperity, and falling prices are a sign of economic distress.

Thomas Woods tells us the truth:

But of course falling prices do not cause economic hard times. They are the natural outcome of a progressing market economy. Under a commodity money, there is a natural tendency for consumer prices to fall over time. The money supply stays relatively constant or increases at a modest rate, but the increasing capital investment and resulting productivity gains of a market economy typically generate yearly increases in the production of goods and services. Simply put, since we have more stuff and about the same amount of money, the price of goods will fall. There is nothing sinister or economically problematic about this healthy process, which economist Joseph Salerno calls “growth deflation.” It characterized the American economy from 1789 through 1913, a period in which the American economy reached extraordinary heights of prosperity.

We have grown accustomed, living under a fiat currency, to seeing prices rise more or less steadily year after year. Most of us just assume that’s just what happens – prices go up over time. But even in the inflationary environment created by our fiat currency, we can point to sector-specific growth deflation: in high-tech products. Computer prices have declined dramatically, and yet computer firms continue to prosper. In 1999, after all this “deflation,” computer firms were shipping some 43 million units, as compared to only 490,000 in 1980, despite a 90 percent decrease in their products’ quality-adjusted prices. Consumers have obviously benefited.

An economy-wide growth deflation would benefit consumers all the more. This, in fact, is how living standards are raised: more capital investment makes the economy more physically productive, and the increased supply of goods leads to lower prices.[5]

[2] Chart is from economics-charts.com; their source is the Federal Reserve Bank of Minneapolis

[3] Huffington Post, April 4, 2016 Canadian Inflation Is Eating Up Wage Growth, And Then Some

[4] Gary North, Buried Treasure: Evidence from the Past on the Effects of the Politics of Envy (www.garynorth.com, January 29, 2011); Jill Tucker, 1910 Time Capsule Opened at Cleveland Elementary (www.sfgate.com January 27, 2011)