Now that I have several children, I’m often in the company of other parents who talk about the way things “used to be.” When the issue of child safety comes up, I hear parents sadly shake their heads and say things like “it’s not like it was when we were kids … the world is so much more dangerous now.”

Usually, the sentiment behind this idea is that there are more murders now than there used to be.

Now, I’m not exactly known for being a Pollyanna, but I am willing to admit when things are not, in fact, getting worse.

And when it comes to things like homicides, there is no evidence that things are getting worse. It is indeed true that things aren’t like they were “when we were kids,” but that’s a good thing. There were far more homicides in the United States during the 1980s and 1990s than there are today. Things were even worse than that during the 1970s. In fact, the homicide rate in the US was cut in half between 1991 and 2014. And while the homicide rate has inched up over the past two years, it is nowhere near where it was “when we were kids.” 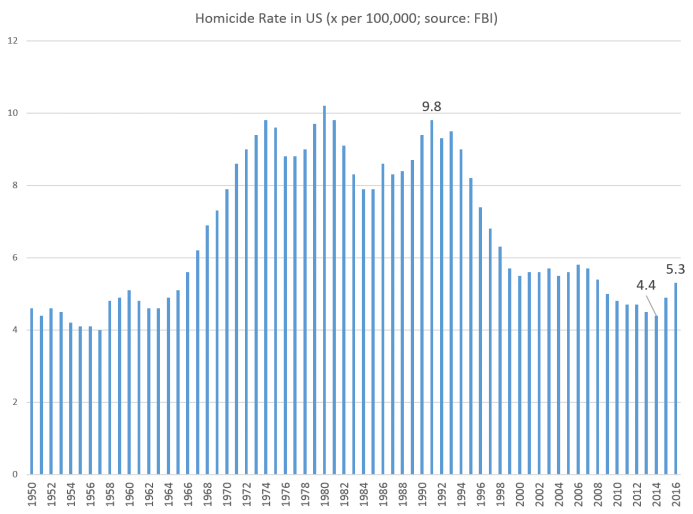 For anyone familiar with these trends, it should not be a shock to hear that a subset of those homicides — school shootings — have decreased over that period as well.

In response to the latest shooting in Florida, Northeastern University released a preview of new research by James Alan Fox slated for publication this fall which shows, quite clearly, that there is no growing trend in school shootings. The university notes:

Mass school shootings are incredibly rare events. In research publishing later this year, Fox and doctoral student Emma Fridel found that on average, mass murders occur between 20 and 30 times per year, and about one of those incidents on average takes place at a school.

Their research also finds that shooting incidents involving students have been declining since the 1990s.

Four times the number of children were killed in schools in the early 1990s than today, Fox said.

“There is not an epidemic of school shootings,” he said, adding that more kids are killed each year from pool drownings or bicycle accidents. There are around 55 million school children in the United States, and on average over the past 25 years, about 10 students per year were killed by gunfire at school, according to Fox and Fridel’s research.

In a February 22 article, New York Magazine came to a similar conclusion, noting:

Schools in the United States are safer today than at any time in recent memory. Criminal victimization in America’s education facilities has declined in tandem with the nation’s collapsing crime rate. Meanwhile, as of 2013, the year after the Newtown massacre, mass shootings accounted for only 1.5 percent of all gun deaths in the United States, or 502 total fatalities. 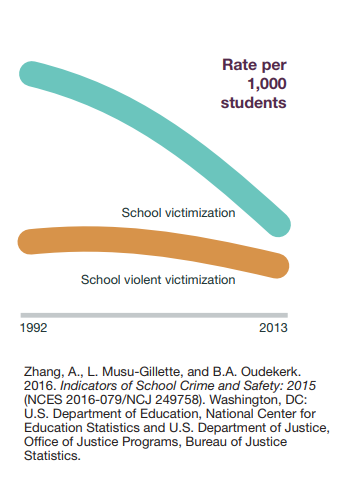 Fox, the author of the Northeastern University research, does not oppose policy changes like increasing the age for purchasing guns. But he notes it’s unlikely to impact the numbers very much:

The thing to remember is that these are extremely rare events, and no matter what you can come up with to prevent it, the shooter will have a workaround,” Fox said, adding that over the past 35 years, there have been only five cases in which someone ages 18 to 20 used an assault rifle in a mass shooting.

Ironically, those most familiar with the data on shootings are often less likely to assume that gun control measures are an easy solution to the problem of homicide.

For example, last year, Leah Libresco at the Washington Post — hardly an organ of the NRA — concluded that gun control measures are of extremely limited value:

…my colleagues and I at FiveThirtyEight spent three months analyzing all 33,000 lives ended by guns each year in the United States, and I wound up frustrated in a whole new way. We looked at what interventions might have saved those people, and the case for the policies I’d lobbied for crumbled when I examined the evidence…

I researched the strictly tightened gun laws in Britain and Australia and concluded that they didn’t prove much about what America’s policy should be. Neither nation experienced drops in mass shootings or other gun related-crime that could be attributed to their buybacks and bans. Mass shootings were too rare in Australia for their absence after the buyback program to be clear evidence of progress. And in both Australia and Britain, the gun restrictions had an ambiguous effect on other gun-related crimes or deaths…

By the time we published our project, I didn’t believe in many of the interventions I’d heard politicians tout. I was still anti-gun, at least from the point of view of most gun owners, and I don’t want a gun in my home, as I think the risk outweighs the benefits. But I can’t endorse policies whose only selling point is that gun owners hate them.

What Libresco did conclude, was that a host of societal issues are driving much of what we hear about in terms of so-called gun violence. Mental illness, suicide, gang violence, and domestic violence are all important factors that drive gun violence. The problem, Libresco admits, is that simply prohibiting certain types of guns doesn’t really address these issues.

In the wake of last month’s [February, 2018] Florida shooting, many opponents of gun control made the mistake of simply accepting the claim that school shootings are getting worse, and are more deadly overall.

According to Fox’s research, though, this is simply not the case. And we also certainly know that homicides overall are way down from where they were in the good ol’ days of my youth.

These apparent facts, of course, don’t stop even rightwing professional Cassandras like Rod Dreher from authoring articles like this one called “Underestimating American Collapse” which uses school shootings as evidence that American civilization is basically on the brink of collapse:

Why are American kids killing each other? Why doesn’t their society care enough to intervene? Well, probably because those kids have given up on life  —  and their elders have given up on them. Or maybe you’re right  —  and it’s not that simple. Still, what do the kids who aren’t killing each other do? Well, a lot of them are busy killing themselves.

Part of the problem with accepting the crisis narrative is that it ignores other priorities and other problems that may deserve our attention elsewhere.

After all, resources for schools — or anything else — are not unlimited, and it is unclear that extremely rare events like school shootings can be put forward as a priority.

This problem of priorities can be seen in the fact that cities where snow falls irregularly do not maintain a huge fleet of snowplows. In Naples, Italy last week [February, 2018], for example, the city experienced the largest snowfall it’s seen in 50 years. According to the Daily Mail, the snowfall was seen as a citywide emergency and “[r]esidents have been told not to leave their homes unless it is ‘strictly necessary.'” One man was said to have even frozen to death in the unexpectedly frigid temperatures.

Now, if even a few inches of snow can bring the city to a standstill and endanger the lives of residents, why does the city not have far more snow plows than it does? Why is there not a network of emergency workers to ensure that residents are not caught in the cold where they can be injured or even killed by cold temperatures?

The answer, of course, is that the opportunity cost of such measures would be extremely high. By maintaining personnel and equipment designed to address a rare snowfall, the city would be foregoing the opportunity to train people or purchase equipment for a wide variety of other activities that are no doubt also deemed essential.

While school shootings no doubt have a greater psychological impact than frigid temperatures, it is no less true that spending large amounts of resources on anti-shooting measures carry with them their own costs.

Now, in the US, many organizations, both public and private have elected to devote sizable amounts of resources to security. But none of them deny that there is an opportunity cost to doing so.

Indeed, opponents of added security in schools have been quick to point out the costs of more security measures.

And yet, proponents of more gun control act as if there are no opportunity costs to these measures. In reality, of course, the costs of enforcing government prohibitions can be very high, both in terms of tax dollars and costs imposed upon otherwise law abiding citizens. The drug war has made this quite clear. In the absence of individual gun ownership, professional security will become more necessary, and in many cases more costly. This imposes a real cost on citizens, especially on those who cannot afford professional security. Relying on the police for protection, of course, has been shown to be unwise at best.

What Are We Doing Right?

Many observers will still point out that even a small number of school shootings is too many. That’s true enough, but when the multi-decade trend is downward, it would hardly be honest to attempt to frame the current situation as a “crisis.” Indeed the challenge should be to discover what factors have led to the decline in violence, and act accordingly. Given that gun ownership has greatly increased in recent decades, it may be that the answer lies somewhere beyond a simple government prohibition on guns.

This article was originally published at Mises.org. Ryan McMaken is an economist, and the editor of Mises Wire and The Austrian.