You have doubtless heard of the automation tsunami coming to wash away our jobs. Robots, we are warned, will staff the factories and manufacture life’s necessities without employing a soul. Driverless Teslas will ferry the wealthy to and fro.

What will become of us jobless masses? Will we starve? Will the wealthy deploy giant carnivorous Roombas to keep the streets clear of riff-raff, driving us to seek refuge in the forests?

Some perspective is in order.

If you were an American a couple centuries ago, you worked about 70 hours per week. The US was mostly a nation of subsistence farmers where virtually everyone had to work. From childhood until you fell over dead, fields needed to be tended and cows milked if you were to eat. Idle your early years in school? Fuggedaboudit. Retirement? A luxury people couldn’t even imagine.

Since that time, the machines have cut both the labor force and the work week by half. Today, only 165 million of the United States’ 329 million people have jobs at all. The average worker puts in only 34 hours per week.

In other words, modern societies have figured out how to furnish everyone with dramatically higher standards of living while sparing 50 percent from working and halving the burden of those who do. 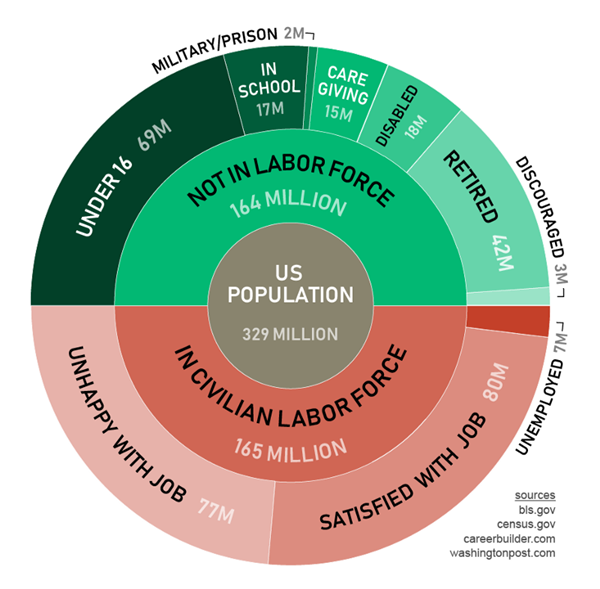 An unemployment crisis? Not so much. Americans do not, on the whole, want to be working.

About half of workers (49 percent) dislike their jobs. Of the non-workers, only seven million are looking for work (generally finding it within a few months), and about three million want a job but are discouraged from looking, which is to say some 161 million people are not working and happy about it.

The Next Wave of Work Relief

Today, artificial intelligence promises a fresh bonanza of productivity, raising our standards of living to new heights while reducing the demands on us to new lows. Someday, only one in five of us will need a job, then one in ten. We’ll simultaneously enjoy living standards improvements we can’t even imagine today.

We humans are difficult to please. On the one hand, we like changes that improve our lives. On the other, we like certainty — the comfort of the status quo, or at least a clear vision of what will change in the future.

So the number of anxious stories in the media about the coming automation wave is understandable. Which jobs will disappear? When? What will those people do then?

These questions are hardy perennials that bloom in every era. Pundits may offer their conjectures, but technology’s capacity to surprise us is breathtaking and humbling, as is our collective capacity to adapt.

“If we abolish slavery, how will the cotton get picked?” was an important question a couple centuries ago. It turns out the answer is giant machines that run on black goo pumped from underneath distant deserts and shipped around the world. This is to say the question was not answerable. Anyone with the foresight to predict that accurately would have been denounced as a lunatic.

“Robots come, jobs go” is wildly reductionist itself because technology always opens at least as many doors as it closes. Who predicted a decade ago that the taxi industry was about to be totaled? And that this would result in not only more jobs driving taxis (ridesharing’s version) but also better jobs in many ways? Suddenly taxi driving is open to people who don’t have $100K for a medallion, don’t want to drive 60 hours a week, and don’t even know their way around town.

When society gets to the point where only one in five of us holds a job, how will the other four eat? Certainly, some by the same means that the non-working half do today — parents supporting their kids, adults supporting their parents, investments supporting retirees, scholarships and loans supporting students, and so on. But we can’t know. When that day comes, there will be millions of individual answers, not a few simple ones.

Round Up the Usual Socialist Programs

One would think that in an age when even the poor live better than Rockefeller did, that jobs focused on lamenting our dire circumstances would have gone the way of the elevator operator. But the doomsday industry, like the vinyl record, defies progress.

Four hundred million jobs will be stolen by 2030, they tell us. Peril! All hands on deck! Robots are winning the race! Devastating impact!

Is it even reasonable to talk about “the problem” posed by automation? Humanity has struggled for millennia for higher standards of living with less work. Even today, millions dislike their jobs, and now the robots are arriving to take a few more chores off our hands. They’ll make different people’s jobs better in a million ways and worse in a million ways we can neither predict nor average together once they’ve happened.

What we can be sure of, though, is that on the whole, we’ll be glad the robots showed up. A few decades from now we’ll look back on how people lived in 2018 with a shudder. Look at all those people who worked jobs they hated!

Who here wants to go back to 1975, listening to your 8-track tape player in your exploding Pinto with no air conditioning? That’s what I thought. Join me in welcoming the next technological revolution.