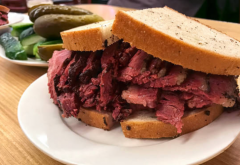 On January 1 this year, a new law in the Flemish region of Belgium went into effect, effectively banning kosher slaughter of animals “after regional parliaments introduced prohibitions for animals that have not been pre-stunned.”[1]

According to The Jewish Chronicle:

Shechita is banned in Flanders as of January 1, while similar restrictions will be in place in the French-speaking Walloon region from September 2019.

Local rabbis said it was in direct contradiction to Jewish law, which requires that an animal be uninjured and in optimal health before slaughter.

One added that the Belgian measures were putting Jewish lives “at risk.”

We see similar conflicts between advocates for religious freedom and those who oppose male circumcision, and between the two sides in the abortion debate. We see it in debates over bans on Muslim head coverings. In democratic political systems — including those with strong constitutional protections for minorities — the majority opinion eventually wins out. Constitutions can be changed, and what the majority considers to be “right” will eventually become the position of all institutions.

Moreover, in cases like kosher slaughter, the activities being targeted are no mere preferences. They touch on fundamental values, and they present a clear conflict with other value systems. In cases such as these, where there is no apparent room for compromise. And if there is no “middle ground,” whose values ought to prevail?

Throughout most of the West, of course, we’re all taught from an early age that “democracy” will allow everything to work itself out. The parties in conflict will enter into “dialogue,” will arrive at a “compromise” and then everyone will be happy and at peace in the end.

After all, if one group of people believes that a 3-month-old fetus is a parasite that has trespassed against the mother, those people are going to find little room for compromise with a group of people who think the same fetus is a person deserving legal protection.

Indeed, we see the shortcomings of democracy at work every time this latter issue comes up. One side calls the other killers who are complicit in the killing of babies. The other side calls their opponents rubes and barbarians, probably motivated by little more than crazed misogyny. Similar dynamics, of course, are present in cases involving animal rights, circumcision, and headscarves. One side thinks that their side is the only acceptable option for virtuous people. “Virtue,” of course, can be defined any number of ways. Some are so blinded by their cultural biases, in fact, that they even conclude that no “civilized” person could possibly believe that, say, circumcision is anything other than a barbaric practice. Those who continue to believe in such things must therefore be forced “into the 21st century” by the coercive power of the state. Their religious beliefs, as Hillary Clinton demanded in 2015, “have to be changed.”

These problems also exist under authoritarian, non-democratic regimes. But anti-democrats usually admit that the state is using force to support one side over the other. Democrats, on the other hand, often prefer to indulge in comforting fictions. What many supporters of democracy refuse to admit is that there is no peaceful debate that will solve this conflict. The conflict is philosophical and moral in nature. And, so long as both sides are forced to live under a single legal system, any “compromise” will take the shape of one side imposing its position on the other by force. In the end, the losing side will be taxed to support the regime that disregards its views and forces compliance with laws made by the winning side.

Those on the winning side, of course, don’t see any problem here. What the minority thinks of as “oppression” is really — according to the winners — just “modernization,” “progress,” “decency,” “common sense,” or simply “the will of the majority.” The fact that the enforcement of that will of the majority is founded on state violence is of little concern.

The Solution: Secession and Decentralization

Ludwig von Mises, who was himself a democrat, offered a solution to the problem of democratic majorities: self-determination through secession and decentralization.

For Mises, populations must not be forced perpetually into states where they will never be able to exercise self-determination due to the presence of a more powerful majority. On a practical level then, populations in regions, cities, and villages within existing states must be free to form their own states, join other states with friendlier majorities, or at least exercise greater self-government via decentralization.

Moreover, in order to accommodate the realities of constantly-changing populations, demographics, and cultures, borders and boundaries must change over time in order to minimize the number of people as members of minority populations with little to no say in national governments controlled by hostile majorities.

In Mises’s vision, there is no perfect solution. There will always be some minority groups that are at odds with the ruling majority. But, by making states smaller, more numerous, and more diverse, communities and individuals stand a better chance of finding a state in which their values match up with the majority. Large unitary states, however, offer exactly the opposite: less choice, less diversity, and fewer changes to exercise self-determination.

The Option of Decentralized Confederations

Nor do all political jurisdictions need to be totally independent states. Mises himself advocated for the use of confederation as a solution to problems of cultural and linguistic minorities. Confederations might be formed for purposes of national defense and diplomacy, Mises noted. But in any country with a diverse population, in order to maintain internal peace, self-government of domestic affairs must be kept localized and so as to minimize the ability of a majority group to dominate a minority group.

Mises didn’t invent this idea, of course. This sort of confederation was justified on similar grounds by the founders of the Swiss Confederation and the United States. Moreover, while not planned out ahead of time, the government of Austria-Hungary was by necessity decentralized to minimize internal conflict. In cases such as these, matters of language, religion, education, and even economic policy must be handled by the local majority, independent of any nationwide majorities. Or else democracy becomes little more than a tool for the winning coalition to bludgeon the losing coalition.

For decades, this worked at various times in the United States. On the matter of abortion, for instance, Americans agreed prior to Roe v Wade to allow abortion laws to be determined at a local level and be kept out of the hands of the national government. Public schools — and what was taught in them — were governed almost exclusively by local school boards and state governments. Even immigration policies and linguistic issues were decided by local majorities, and not by national ones. So long as these matters remained local matters they were irrelevant to national politics. Under these conditions, a victory for one party or another at the national level has little impact on the daily practice of one’s religion, moral values, or schooling.

As localized democracy turns into mass democracy, however, majorities exercise increasing power over minority groups. Each election becomes a nationwide referendum on how the majority shall use its power to crush those who pose a threat to the prevailing value system. Even worse, when there is one nationwide “law of the land” there is no escape from its effects, save to relocate hundreds of miles away to a foreign land where the emigrant must learn a new language and a new way of life far from friends and family.

Needless to say, as this sort of democratic centralization increases, the stakes become higher and higher. The potential for violence becomes greater, and the disenfranchisement of minority groups becomes ever more palpable.

Mises understood well what the end game to this process is. It’s political and social unrest — followed by political repression to “restore” order. War may even follow. For Mises, the need to guarantee localized self-determination was no mere intellectual exercise for political scientists. It was a matter essential to the preservation of peace and freedom. We would do well to take the matter as seriously as he did.

This article was originally published at Mises.org. Ryan McMaken is a senior editor at the Mises Institute. He has degrees in economics and political science from the University of Colorado, and was the economist for the Colorado Division of Housing from 2009 to 2014. He is the author of Commie Cowboys: The Bourgeoisie and the Nation-State in the Western Genre.

[1] The law also bans “halal” slaughter, which is basically the Muslim version of kosher slaughter, and is extremely similar. Not surprisingly, the law’s passage was motivated in part by anti-Muslim sentiment in Belgium, although animal welfare was the most-often used justification for the legislation.