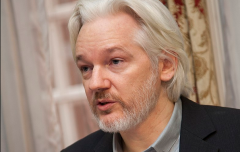 Inadvertently released federal documents reveal that U.S. officials have apparently secured a secret indictment against Julian Assange, the head of WikiLeaks who released secret information about the internal workings of the U.S. national-security establishment. In any nation whose government is founded on the concept of a national-security state, that is a cardinal sin, one akin to treason and meriting severe punishment.

Mind you, Assange isn’t being charged with lying or releasing false or fraudulent information about the U.S. national-security state. Everyone concedes that the WikiLeaks information was authentic. His “crime” was in disclosing to people the wrongdoing of the national-security establishment. No one is supposed to do that, even if the information is true and correct.

It’s the same with Edward Snowden, the American contractor with the CIA and the NSA who is now relegated to living in Russia. If Snowden returns home, he faces federal criminal prosecution, conviction, and incarceration for disclosing secrets of the U.S. national-security establishment. Again, his “crime” is disclosing the truth about the internal workings of the national-security establishment, not disseminating false information.

Such secrecy and the severe punishment for people who disclose the secrets to the public were among the things that came with the conversion of the federal government to a national-security state.

Under the republic form of government, there was no enormous permanent military establishment, no CIA, and no NSA, which are the three components of America’s national-security state.  The last thing Americans wanted was that type of government. In fact, if Americans had been told that the Constitution was going to bring into existence a national-security state, they never would have approved the deal and would have continued operating under the Articles of Confederation, a type of governmental system where the federal government’s powers were so few that it didn’t even have the power to tax.

Under the republic, governmental operations were transparent. There was no such thing as “state secrets” or “national security.” Except for the periodic backroom deals in which politicians would make deals, things generally were open and above-board for people to see and make judgments on.

An implicit part of the conversion was that the Pentagon, the CIA, and the NSA would be free to exercise their omnipotent powers in secret. Secrecy has always been a core element in any government that is structured as a national-security state, especially when it involves dark, immoral, and nefarious powers that are being exercised for the sake of “national security.”

One action that oftentimes requires the utmost in secrecy involves assassination, which is really nothing more than legalized murder. Not surprisingly, many national-security officials want to keep their role in state-sponsored murder secret. Another example is coups initiated in foreign countries. U.S. officials bend over backwards to hide their role in such regime-change operations. And then there are the surveillance schemes whereby citizens are foreigners are spied up[on] and monitored. Kidnapping, indefinite detention, and torture are still more examples.

But it’s not just Nazi Germany. There are many other examples of totalitarian regimes that are based on the concept of national security and structured as a national-security state. Chile under Pinochet. The Soviet Union. Communist China. North Korea. Vietnam. Egypt. Pakistan. Iraq. Afghanistan. Saudi Arabia. Turkey, Myanmar. And the United States. The list goes on and on.

And every one of those totalitarian regimes has a state-secrets doctrine, the same doctrine that the Pentagon, CIA, and NSA have.

A newspaper in Vietnam, which of course is ruled by a communist regime, reported that a Vietnamese citizen named Phan Van Anh Vu was sentenced to 9 years in prison for “deliberately disclosing state secrets.”

The military dictatorship in Myanmar convicted two Reuters reporters for violating the country’s law that prohibits the gathering of secret documents to help an enemy.

RT reports that the Russian military will “launch obligatory courses on the protection of state secrets starting next year.

US News reports that the regime in Turkey is seeking the extradition from Germany of Turkish journalist Can Dunbar, who was convicted of revealing state secrets.

Defenders of Assange and Snowden and other revealers of secrets of the U.S. national security state point to the principles of freedom of speech and freedom of the press to justify their disclosures.

I’ve got a better idea: Let’s just dismantle America’s decades-long, nightmarish Cold War-era experiment with the totalitarian structure known as a national-security state and restore a limited-government republic to our land.

This article was originally published at FFF.org. Jacob G. Hornberger is founder and president of The Future of Freedom Foundation. He received his B.A. in economics from Virginia Military Institute and his law degree from the University of Texas. He was a trial attorney for twelve years in Texas. He also was an adjunct professor at the University of Dallas, where he taught law and economics. In 1987, Mr. Hornberger left the practice of law to become director of programs at the Foundation for Economic Education. He has advanced freedom and free markets on talk-radio stations all across the country as well as on Fox News’ Neil Cavuto and Greta van Susteren shows and he appeared as a regular commentator on Judge Andrew Napolitano’s show Freedom Watch.