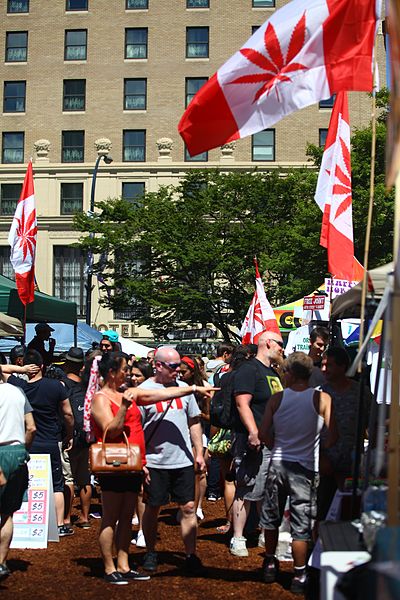 On October 17, 2018, recreational marijuana was legalized in Canada, ending 95 years of prohibition. For those who believe, as I do, that individuals should have the freedom to determine their own consumption, this is good news. However, I am not congratulating Prime Minister Justin Trudeau’s Liberal Party for making good on a campaign promise made three years earlier. Instead, I point out the hypocrisy of not applying their rationale for pot legalization to the legalization of all drugs.

As for those Canadians who opposed the legalization of pot, they may have hoped that Andrew Scheer, leader of the federal Conservative Party, would be their champion if he wins the election later this year. However, Scheer also holds a hypocritical view on this issue.

In 2013, in reference to hundreds of thousands of criminal convictions because of marijuana, Trudeau said “Those are lives ruined.”

In May of last year, Trudeau said “that legalization would squeeze organized crime out of the lucrative cannabis market,” and the government is focused on legalizing marijuana because “the current system hurts Canadians.” Trudeau was not exaggerating the harm done to Canadians. German Lopez at vox.com wrote that “In Canada, tens of thousands of people are arrested for marijuana offenses each year, ripping communities and families apart as people are thrown in jail or prison and gain criminal records.”

The harmful effects of Canada’s illegal drug markets mirror the effects of the drug war in the United States which has done almost nothing to curb drug addiction. Former U.S. Federal Judge Nancy Gertner said, “We were not leveling cities as we did in WWII with bombs, but with prosecution, prison, and punishment.” As Laurence Vance wrote, “The drug war is not only a failure, it is a monstrous evil that has ruined more lives than drugs themselves.”

Trudeau clearly stated his objective. He wanted to legalize marijuana in order to eliminate the influence of organized crime and avoid future harm done to Canadians. This is an admirable goal, but his hypocrisy is evident through his refusal to legalize other, harder drugs. His apparent indifference to organized crime and the harm done to Canadians by the remaining illegal drug markets (heroin, cocaine etc.) suggests that his promise to legalize pot may have been nothing more than a ploy to win a few votes, and never based on any genuine concern for the wellbeing of Canadians.

Trudeau’s hypocritical drug policy will do nothing to alleviate the wretched social and economic effects of Canada’s remaining illegal drug markets.

Andrew Scheer, leader of the federal Conservative Party, is “opposed to the legalization of recreational marijuana for adult use in principle [emphasis added],” but he “seems to acknowledge the economic pitfalls of trying to reinstate prohibition once tens of thousands of Canadians are employed in income-tax-paying CPP-contributing jobs related to the cannabis sector.”

Scheer’s views are curious. He said “If this [marijuana] is something that has been legal for a period of time, it’s going to be very difficult to …  make this illegal again.” So what? Marijuana was legal for a period of time before it was made illegal in 1923. Aren’t politicians supposed to fight for what they believe is right? If Scheer is a man of principle, he should be telling voters that his goal is to re-criminalize cannabis if he is elected later this year, regardless of how difficult he thinks this will be to accomplish. If Scheer’s behaviour, as seen through the political policies which he does or does not promote, is not consistent with his principles, then he is a hypocrite. And that seems to be the case. If elected, Scheer says he will maintain marijuana’s legal status.

If Scheer believes he cannot win the election by standing firm on this principle, then perhaps he should not be the leader of the party, let alone a politician. Voters want to elect a person they can trust, a person who not only shares their principles, but who will, without exception, always stand on principle. If a principle is open to compromise, it is no longer a principle, and a politician who is willing to cast aside one principle will not hesitate to cast aside other principles, promises, and commitments.

Sadly, the hypocrisy of Scheer and Trudeau is matched by the behaviour of almost every politician in the country. In their pursuit of power, they seem willing to say or do whatever it takes in order to get elected, and unprincipled politicians are notorious for breaking campaign promises post-election. Trudeau broke promises. His predecessor (Harper) broke promises. They all do, at every level of government.

For those of us who consistently promote the cause of liberty, we can be thankful for the legalization of marijuana in Canada, but this does not mean we should give any credit to the government. Sometimes, we win by accident. Trudeau and the Liberals were under intense political pressure to keep that promise because they had broken so many others.